The means of delivery (of the future) of parcels 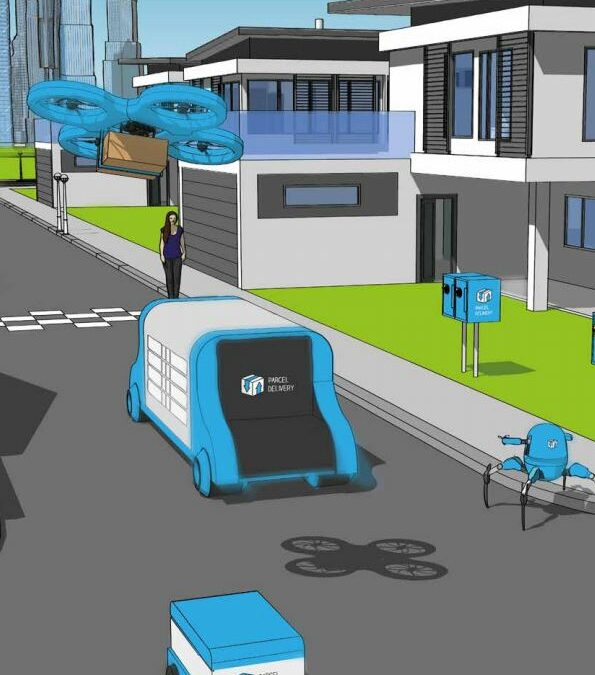 A recent survey writen by Mc Kinsey highlighted the delivery trends that await us in 10 years. Back to the Future !

The bicycle - electric or not - still has a long way to go. Delivery in the hypercenters of mega-cities is a headache that accompanies the growth of e-commerce. Many companies are already betting on autonomous (and carbon-free) vehicles to regulate traffic in the city, but in the meantime, bicycles remain an easy and fast delivery method for the last mile.

The Climate Plan of the city of Paris (France) elaborated in 2005 "predicted" a 100% bikeable Paris by 2020 (we are still far from the count) and no more diesel or gasoline cars by 2030 to improve air quality. Bicycles therefore have their place in the future, especially since the parcel delivery industry is estimated to be worth 343 billion dollars worldwide by 2020 and the volume of goods shipped in this same world is estimated to be multiplied by 4 between 2015 and 2050!

80% of deliveries by 2026 will be made by autonomous and semi-autonomous machines, reducing the cost of deliveries in cities by 40%. Moreover, fast delivery by green vehicles will only be possible with the creation of warehouses at the edge of cities.

Imagine an autonomous vehicle leaving a suburban warehouse and setting up in the city center in its defined delivery zone with all the parcels to be delivered during the day. From this vehicle, cyclists but also drones and robots would take care of the delivery in less than 30 minutes.

- The first includes a cabin with a "concierge" who does not drive but plans routes and supervises deliveries. He also intervenes in the case of deliveries that require human intervention, such as heavy or fragile packages, registered letters, etc. In the event of a problem, he can take over control of the vehicle.
- The second type of vehicle has no human on board, but only lockers that can be opened via an application on a smartphone.

The innovation lies in the fact that the two models can run in convoy, with the shuttle with cabin acting as a pilot fish.

✅ Delivery with a delivery robot droid

Delivery robots are small autonomous devices that carry packages or meals. It is estimated that there are already about ten manufacturers in the world who are investing in this market. These robots will be able to move at a speed between 12km/hr in fluid traffic and 5km/hr in case of traffic jams.

These little droids will be ideal for meal deliveries or very small packages since the goal is to offer an electric vehicle without a driver or delivery person! Uber Eats, Pizza Hut and Domino's are already on the case. However, when we see the fate that some people put scooters through the wringer because they bother themwe imaginethe worst for those poors robots

A marketplace (that we will not name!) is a precursor in this field since its objective is currently to be able to deliver small packages (less than 3kg), which represents 86% of the orders. This American e-commerce giant has started to develop the delivery by this means with the objective to deliver its subscribers in less than 30 minutes.

UPS has just applied for the certifications to start on the american continent and DHL has partnered with drone specialist EHang to cover the Chinese territory. The German carrier has set up mini-warehouses from which the drones leave to deliver on an 8km route (in 40 minutes). The customer then collects his parcel from a DHL depot.

✅ And why not be delivered by a humanoid?

It seems utopian but unlike the drone which cannot lift packages over 3 kg, the robot would be able to deliver your heavy loads.

The same marketplace (which we still won't name) is currently testing its own robot, named Scout, which delivers on the sidewalk: the customer receives a notification and finds the robot a few steps from his house.

The instructions are poorly developed in France, despite the advantage of offering a product availability 7 days a week, 24 hours a day.

But e-commerce giants and transport leaders (La Poste, DHL...) are not abandoning this delivery method. Thus, Cdiscount (and others) are partnering with the SNCF to plan the deployment of lockers in 1000 stations in France by 2025.

💡Who would have imagined that the delivery of the future of your package would go through the locker?

Still according to McKinsey, 2 trends could emerge.

In less urbanized areas, deliveries could be made by freelanceThe objective is twofold: to create employment and to reduce the number of lost packages. This solution, particularly adapted to small towns and rural areas, would have an advantage: these freelancers would operate in their neighborhood/community and would interact with customers every day.

Another trend is tunnels to reduce delivery times in booming cities. Packages would be transported in tunnels through an underground traffic network. Conveyor belts or pressurized tubes would be used to transport the parcels to their recipients at collection points in the gardens or at collective relay points. The significant advantage is that it passes under the road traffic and speeds up the delivery time.

✅ The My Flying Box solution

My Flying Box allows e-merchants to optimize the entire shipping process: label printing, package tracking, returns portal, etc. By connecting your store to My Flying Box, you also benefit from a large network of carriers to allow you to prepare and ship all your orders in a few clicks to more than 140 destinations worldwide. It's simple, it's fast and it's efficient, the future is just a click away.

It's all well and good to dream, but there's still a limit to these different delivery methods of the future - not My Flying Box's, we're just awesome!🥰

What place will the human have in the face of this robotization? Where will be the pleasure of receiving from the hands of the deliveryman his long-awaited package, of exchanging a hello, a good day, see a 🥐 and a ☕?

The future of package delivery has its limits and in my opinion, the limit will be social interaction.

And you, how do you see the delivery of tomorrow? We promise to respond to all your comments.